You won’t ever meet another human quite like Clairey Grubbs.  She wears her heart on her sleeve, she’s a go getter and would give anyone the shirt off her back.  Like many of my women Fly Sisters, Clairey came into my life via social media. 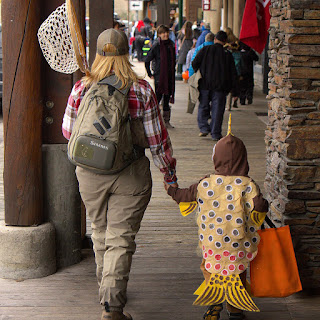 United Women on the Fly (UWOTF) was created to build and support a community of anglers (specifically women).  Clairey has helped play a vital role with the group as the FIRST Regional Fly Sister who helps admin the Facebook group, shares events in her region and posts on our Instagram account. It’s a no brainer to have Clairey as the first “Featured Fly Sister” for the UWOTF ‘Monthly Mend’ newsletter.

Like most fly anglers, Clairey started fishing with a conventional rod as a young child.  It wasn’t until she moved to Jackson WY that she decided to give fly fishing a try.  Well maybe it was impressing her now husband Cody?

8 years later, marriage, motherhood and becoming more comfortable as an angler; Grubbs (with a little encouragement from Hopper) decided to co-found Lady Anglers of WyDaho (LAWD) with friend and Pioneer Anglers Fly Shop owner Christy Carlson in May 2017.

This weekend the women’s group along with is apart of the Women’s Free Fly Fishing Day and Gear Symposium hosted by WorldCast Anglers.  The event is being held at the Snake River Sporting Club from 11-6pm.  If you’re in the area be sure to check it out.   Artemis Sportswomen – Jackson Hole Trout Unlimited – JD High Country Outfitters – Lady Anglers of WyDaho #LAWD– Patty Reilly’s Guided Connections – Snake River Fund – Stripping For A Cure – Wyoming Angling Company LLC.

Today, Clairey is still happily married to her part time guide and business owner where they reside in Alpine, WY. They have a 6 year old son who’s been fishing with them since he was 10 days old and is turning into quite the angler himself. Fly fishing is the tie that binds her family. She is eager to continue growing as an angler, improving
her rowing, and sharing her passion with others both on and off the water.

What an awesome idea…and an incredible woman (Clairey)! Nice to meet you and know more about you!

Michelle – Thank you for the comment. Clairey is pretty amazing!!

Love your story. Another Fly fisher woman in Walla Walla

Hi Barbara. Connect with the ladies in our closed Facebook group at https://m.facebook.com/groups/unitedwomenonthefly